NHL Revealed: A Season Like No Other - Extended Edition

NHL Revealed: A Season Like No Other is a seven-part series following the League’s top stars on and off the ice as they prepare for the 2014 Coors Light NHL Stadium Series™, 2014 Tim Hortons NHL Heritage Classic™ and Sochi. Watch teammates bond in a once in a lifetime experience playing at iconic sports venues like Yankee Stadium and Dodger Stadium, only to become foes when country pride is on the line in Sochi. The series continues when hockey’s brightest stars reunite with their NHL® teams for the march to the 2014 Stanley Cup® Playoffs. The Extended Edition features 15-minutes of never before scene footage and bonus scenes for an uncensored look at the series and its stars, including captain Sidney Crosby (PIT), teammates Jonathan Toews and Patrick Kane (CHI), siblings Daniel and Henrik Sedin (VAN) and goaltenders Henrik Lundqvist (NYR) and Jonathan Quick (LAK). 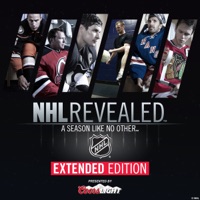